THE JAMAICAN COAT OF ARMS 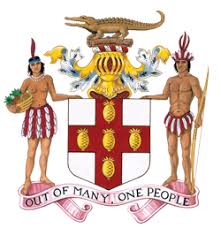 JAMAICA’S NATIONAL MOTTO
The Jamaican national motto is ‘Out of Many One People’, based on the population’s multiracial roots. The motto is represented on the Coat of Arms, showing a male and female member of the Taino tribe standing on either side of a shield which bears a red cross with five golden pineapples.


THE NATIONAL BIRD AND NATIONAL FRUITThe Jamaican doctor bird, or swallow tail humming bird is Jamaica’s national bird because it lives ONLY in Jamaica.Although native to West Africa, the use of ackee in food is especially prominent in Jamaican cuisine. Ackee is the national fruit of Jamaica, and ackee and saltfish is the national dish. Ackee and codfish is ranked number two in the world by National Geographic survey of national dishes.


JAMAICA’S NATIONAL FLOWER AND TREEJamaican National Flower – Lignum Vitae. The Lignum Vitae (Guiacum Officinale) was found here by Christopher Columbus. Its name, when translated from Latin, means “wood of life” – probably adopted because of its medicinal qualities. The short, compact tree is native to continental tropical American and the West Indies.The Blue Mahoe (Hibiscus Elatus) is the national tree of Jamaica. It is indigenous to the island and grows quite rapidly, often attaining 20m (66ft) or more in height. In wetter districts it will grow in a wide range of elevations, up to 1200m (4000 ft.) and is often used in reforestation.