Science Skills – Grade 4 How We See

The human eye is the organ of sight in the human body. In order for humans to see light must be present. This along with the brain helps us to see images.

In the middle of the eye is an opening or a hole. This hole is the pupil. This is where the light enters the eye. Surrounding the pupil is a coloured membrane known as the iris. It has muscles which helps it to contract or expand and control the amount of light entering the eye.

Behind the pupil and iris is the lens. The lens in the eye is a convex lens which helps to focus or bring light rays together when they enter the eye. The light rays are focused to the back of the eye onto the retina. The retina contains light sensitive cells called rods and cones. Rods allow us to see in black and cones allow us to see in colour.

An inverted image is formed on the retina, attached to the retina is the opic nerve. The optic nerve sends a signal to the brain which corrects the inverted image and we are able to see the image correctly.

Inside the eyeball is a jelly like substance called vitreous humor which keeps the eyeball in place and gives its shape.

A clear image must be formed on the retina in order for us to see. 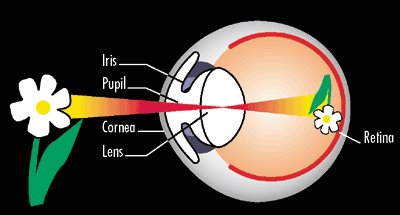 When light is reflected from the object, it passes through the pupil to the lens. The lens bends the light rays so that they come together at a point of focus and forms an upside down image on the retina.

The optic nerve which is attached to the retina then sends a signal to the brain so that the brain will then interpret the image and turn it right side up, allowing us to see the object clearly.